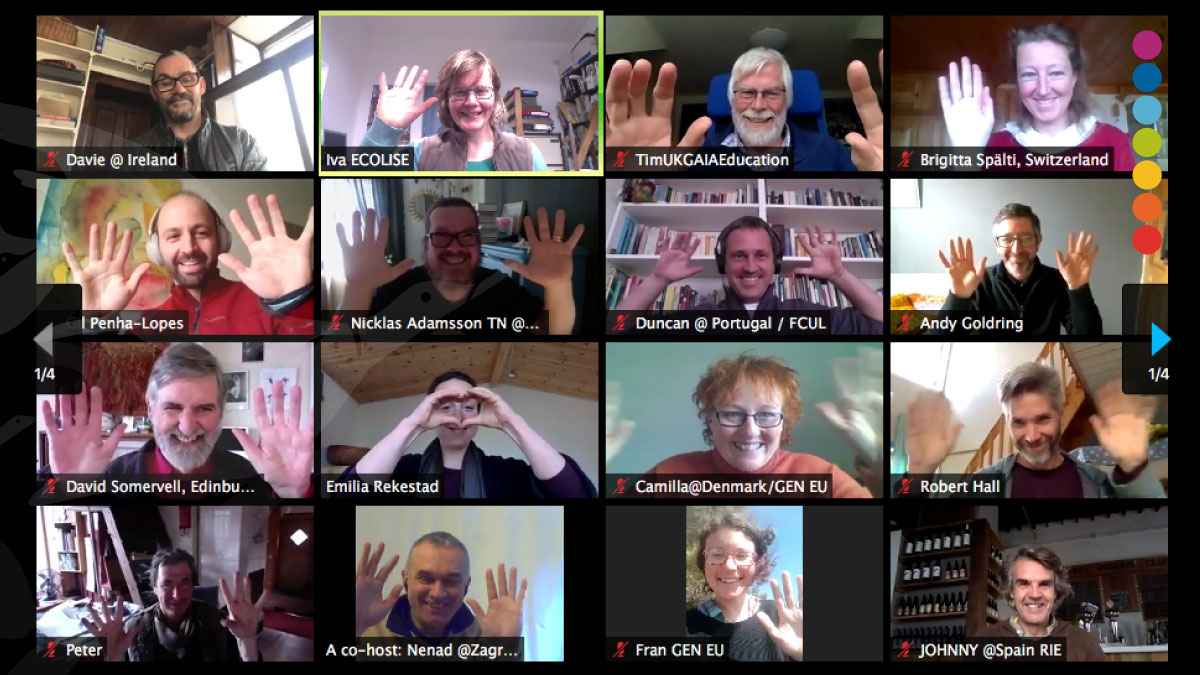 “Perhaps we cannot raise the winds. But each of us can put up the sail, so that when the wind comes we can catch it.”

I was one of 63 participants of the biggest and longest ZOOM call I have ever experienced – two days ! As I logged on to my laptop on the morning of Friday 3 April, I wondered how this piece of technological creativity would work. Could our amazing hosts in Sweden who, up to a few weeks beforehand had been expecting to physically welcome the ECOLISE General Assembly and showcase traditional Swedish hospitality, pull it off? Could the legendary community networking really succeed without the intimacy and joy of direct physical interactions between all the participants? Would we be defeated by the COVID 19 lockdown, or emerge triumphant?

At the end of an exhausting two days, I can say without reservation that it was a resounding success. This was technological wizardry working at its best, under the brilliant management of the GA team. All the ‘classic’ ingredients of an ECOLISE General Assembly were there – inspirational leadership, vision, passion, and grass roots project stories interweaved in collective brainstorming. Yes, we missed the food, the dancing, the socializing but we all came away renewed and fired up, ready to take on new challenges.

For those that really want to dig deep, the 48 pages of HARVEST documents records all the two day discussions. The formal part – approving the ECOLISE 2020 Budget, 2019 Activity Report and Internal Audit report, took place without major debate. In its five year existence ECOLISE has grown in scale and influence. Its funding base has expanded dramatically from virtually nothing in 2016 to a budget of € 600,000 this year, allowing additional staff to be recruited, an office in Brussels to be opened, and € 100,000 to be kept on ice for a rainy day. Last year ECOLISE won the prestigious LUSH award for its work on advocacy and it has been increasingly successful in obtaining EU funding. Its seminal Status report is increasingly being used as a reference document.

In short – ECOLISE has taken off. That’s not to say that there aren’t issues to be resolved: the relationship with its members to be honed and refined, and its staff working practices and procedures and its codes of conduct to become more professional and transparent. But ECOLISE is on the move. It now has 46 members from 26 countries and at this year’s GA a further 3 new members were approved: the Finnish Village Movement, Irish Local Development Network and the Collectif pour une Transition citoyenne.

However, it is fair to say that THE central issue dominating the GA was COVID19 and its impact on communities. In a clarion call from Daniel Wahl giving the Keynote address from his laptop in Majorica, he called on all of us to wake up to the new challenges, become more active and re-think the future. Quoting EF Schumacher of ‘Small is Beautiful’ fame, he urged us to:

“put up the sail, so that when the wind comes we can catch it.”

In the lead up to the European Day for Sustainable Communities in September this year and the roll out of the ECOLISE Communities For Future project , the GA resolved to meet this challenge. We would bring our resources together , we would re-calibrate our actions, we would provide community leadership.

The gauntlet has been thrown down. Can GAIA Education turn its energies to meeting this challenge too?